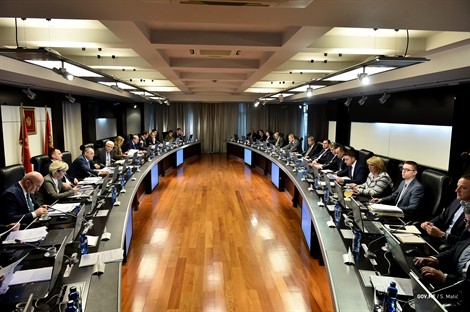 Podgorica, Montenegro (17 January 2019) — At today’s session, the Montenegrin Cabinet passed the Report on the Implementation of the Programme of Action of the Government of Montenegro for 2018, which shows that the level of fulfillment of obligations exceeds three quarters (77.2%). The discussion stressed that excellent results were made in 2018, including high economic growth, a significant reduction in unemployment, rise in foreign investment and intensive implementation of development projects.

Priorities of the Government for this year, which should set the basis of the 2019 Programme of Action, in addition to the obligations from the European integration, include continuous and comprehensive activities and hard work to continue dynamic economic growth, improvement of business environment, foreign investment inflow, fiscal stability, effective fight against grey economy, implementation of projects from the Capital Budget and advancement of the quality of public services – as prerequisites for the achievement of the most important goal of the Government – creating new jobs and increasing the living standards of citizens.

“This year, our most important goal is to increase the quality of life of citizens,” said Prime Minister Duško Marković.

The Government passed the Draft Law on Administrative Fees and the Draft Law on Local Utility Fees. The new law on administrative fees is proposed with the aim of improving the conditions for doing business and improving economic activity, both at state and local levels. Accordingly, the defined solutions result in lower operating costs, especially for micro and small enterprises through the application of lower fees, fewer payments and fewer procedures, as well as lower costs for citizens, resulting in more available income for consumption or saving and positively affecting economic growth.

The Draft Law on Local Utility Fees contributes to improving the conditions for doing business at the local level by creating a simpler collection model for local self-government units, as well as creating a simpler model of settling obligations towards local governments by citizens and businesses.

The Government adopted the Information on the implementation of the Concession Agreement for the exploitation of non-metallic mineral raw materials of technical and construction stone from the Platac deposit.

The Cabinet adopted the Information on the conclusion of the Agreement on the Establishment of the Scientific and Technological Park of Montenegro, a limited liability company, and accepted the founding agreement. The agreement stipulates that the company is established as a multi-member company, founded by the Government of Montenegro and the University of Montenegro, with the founders agreeing that their shares are: the Government of Montenegro – 57% and the University of Montenegro – 43%. The company’s goals are as follows: the acquisition of profits through the activity of managing the construction infrastructure and providing consulting and related services with a view to unifying, encouraging and connecting innovative, scientific, entrepreneurial and economic capacities in Montenegro. After the founding, the company will be financed from: the funds generated by renting a business space which has been transferred to the use and distribution by the founder; funds generated by the provision of services within the scope of the Company’s activities; national and international programmes and projects; donations and other sources in accordance with the law. The founders assumed the obligation to guarantee the financing of the Company’s sustainability in the first 5 years of operation, ending in 2023. So far, EUR 4.333.829,39 has been invested in the construction of the existing facility from the Capital Budget of Montenegro.

The Cabinet adopted the Information on the implementation plan of the recommendations from the Analysis of the media sector in Montenegro for harmonisation with the standards of the Council of Europe and the European Union (JUFREX). This document was developed on the basis of the conducted Media Sector Analysis in the framework of the project Strengthening the Judicial Expertise on Freedom of Expression and Media in South East Europe (JUFREX) and it established recommendations for improving the work of all subjects engaged in media activity. Recommendations from the Implementation Plan are guidelines for the development and implementation of a media policy that promotes freedom of expression and media freedom. The effects of the implementation plan include: guaranteeing the freedom of expression in line with the standards of the Council of Europe and the European Union; guaranteeing the freedom of the media and the safety of journalists; guaranteeing a pluralistic media environment; establishing a media pluralism fund; the normative strengthening of the political, institutional and financial independence of the national brodcaster RTCG; strengthening the institutional independence of the Agency for Electronic Media pursuant to the Directive Amending the Audiovisual Media Services Directive of October 2018; encouraging the financial sustainability of self-regulation; the transparency of state advertising in the media, and the promotion of media literacy.

Today’s session considered the proposal for granting approval for carrying out preparatory works for the construction of a complex engineering project – the construction of the first phase of the Smokovac loop. The Government gave a consent to the Ministry of Transport and Maritime Affairs to perform the necessary works on the Smokovac loop which, in accordance with the valid documents, represents the connection between the Bar – Boljare motorway and the Adriatic-Ionian motorway, as well as the connection to the existing road network.

PUBLIC RELATIONS SERVICE OF THE GOVERNMENT OF MONTENEGRO